I’ve been using the Mozilla Thunderbird e-mail client for … a long time. Google has had a “Less secure apps” policy, where you explicitly have to enable a setting to allow external access to things like e-mail over IMAP, and so on. Google has also been warning their users about upcoming changes, where clients that cannot authenticate using “secure methods” (such as OAuth2), will no longer be able to access things like e-mail over IMAP.

Fortunately (for me), Mozilla Thunderbird can handle this just fine 🙂

Make sure you are using IMAP and not POP3. Go to your account settings. Go to server settings. You should see the IMAP settings (imap.gmail.com:993, etc). Make sure connection security is set to SSL/TLS. Set the authentication method to OAuth2 and re-start Thunderbird. You will be prompted with a Google Login Page. Enter your credentials for the account. Once Google has successfully verified the credentials, it will tell you that Thunderbird wants to access certain things. Allow this, and … you’re done. To verify that everything worked out as it should, re-start Thunderbird once more. You should not be getting any prompts this time.

To access settings for outbound e-mail using Gmail, click on the account name in the list to the left of the Account settings window. At the bottom, to the right, you will see Outoing Server (SMTP). Choose to Edit SMTP Server. Again, check your settings to be smtp.gmail.com (587), STARTTLS, and set the Authentication method to OAuth2, just like you did for IMAP. Re-start Thunderbird.

Repeat this procedure for all your Gmail accounts configured in Thunderbird.

There are a number of ways to figure out your current public IP address automatically, which can be extremely useful for Dynamic DNS (DDNS) situations or other automation ventures, here are some of them.

If the above doesn’t work, you may want to try this:

With various legal directives in place throughout the world, website owners are “off the hook” by providing a cookie disclaimer and the possibility for the visitor to “opt out”. Some websites have a rather odd approach where they refer you to a page with a vast amount of information abou their “data partners” and invite you to “opt out” on their partners’ page(s). It goes without saying that many people don’t bother because it’s just too much work (which is exactly the purpose).

But when your website designer relies on “web fonts” and/or resources from a content distribution network (CDN) like Javascript libraries, you are also, indirectly leaking some visitor data to the companies hosting such resources. Granted, you’re not “leaking as much data”, but with analytical AI and the huge amounts of data many of these “analytical companies” already have on your visitors, you’re simply providing one more piece of the puzzle to them. Free of charge.

The cost of free is perhaps hard to measure for you and me, but Google and others know exactly how much the data about your visitors is worth.

“By continuing to our site, you are agreeing to the collection of data about yourself beyond your wildest imagination and possible comprehension. We could explain it, but you wouldn’t get it anyway.  [OK]”

PS. Hosting external libraries and web fonts on CDN is not always such a grand idea when it comes to website performance. For each and every different such external “site address”, a new session handshake (SSL/TLS/etc) between the visitor’s web browser and the CDN is required.

The short version of this post: Wake the fuck up and smell the maple nut crunch!

The Netflix “documentary”, “The Great Hack”, is a great beginning of something that will take years to be argued, debated, and (mis)understood. Thinking that Cambridge Analytica is the “bad guy”, and “it’s going to be alright now that we know” is all too comfortable (and all too easy).

One serious issue with this and the people that are in charge of making sure it doesn’t happen is that they don’t understand, don’t want to understand, or are actually paid by people who have as their prime interest that they do not understand.

How the United Nations (UN) and other organizations cannot consider ownership of personal information to be a basic and fundamental human right is beyond me, but it also goes to show how slowly the “democratic” machinery works and how easily the system is manipulated by those who understand.

Getting clowns elected as “the ruler” of a nation, or deeply influencing referendums one way or the other, while sinister and non-democratic, is arguably, less dangerous than standing in the way of science in, perhaps, the most important question of our time; the climate debate.

When “data points” can be used to, in the best interest of fossil energy companies, manipulate people and nations to prevent science, common sense, and logic to have its way … we’re truly skating on thin ice; and, it’s melting.

Oh, and you seriously don’t think Google (and others) aren’t doing the same thing? Bwahahaha … that’s good comedy right there.

“War Pigs” and “The Dogs of War” (look them up) have more truth to them than we’d like to think.

“When you upload or otherwise submit content to our Services, you give Google (and those we work with) a worldwide license to use, host, store, reproduce, modify, create derivative works (such as those resulting from translations, adaptations or other changes we make so that your content works better with our Services), communicate, publish, publicly perform, publicly display and distribute such content. The rights you grant in this license are for the limited purpose of operating, promoting, and improving our Services, and to develop new ones. This license continues even if you stop using our Services (for example, for a business listing you have added to Google Maps).” 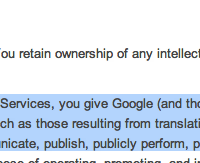 It took Google five+ years to fail in cloning Dropbox, and they didn’t want people using Linux in combination with other operating systems to switch over apparently.

Google has zillions of dollars (though the dollar bill may soon have the Apple logo printed on it, considering the current “net worth” of Apple), they have almost as many talented coders and co-workers, and they are not short of public exposure nor useful ideas. Google’s approach to releasing services has often been “slow and stealth-like”. First they create the whispers, then they get the media to hype it, then they release the “It’s still in beta” service, and then they improve it one step at a time until God and everyone else endorse it like the greatest thing since sliced bread.

The Google+ Android App is mediocre at best; it lacks many features found in the web version. I understand if some features don’t find their way to a “smartphone” application, but something as basic as a +1 button on a comment to a post seems rather fundamental in the Google+ concept to me. This is from the company that brought you the Android operating system and the Google search engine.

Uploading and sharing media is confusing at best. Being a casual Picasa (Photo service by Google) user, I want to share a photo from one of my albums onto my Google+ stream. All I can find is a “Google Buzz” button when I’m album browse mode. “Google Buzz”? Isn’t that the very service that Google was going to retire? Where’s the “Share on Google+” button? Sure, I can copy the public link to a photo, copy & paste it into a post on Google+, but why all the hassle .. ? And if you “upload a photo to a post”, it ends up in a Picasa album called “Photos from posts” that is by no means virtual. You can not re-organize it or move photos from it to your more “permanent” albums. If I upload a video to YouTube and then want to share it on Google+, I sometime get it working, and sometimes it simply shows the “YouTube – Broadcast Yourself.” heading from YouTube (instead of my own description of the video).

Most plugins for popular web publishing tools such as WordPress that I have checked since the “launch” of Google+ are still lacking support for sharing items on Google+, unless you count the little “+1 this” button.

I realize Google doesn’t own the entire IT industry (yet), but I’m surprised at the lack of coordination.

While everyone was (and still are) hyping Google+ as lightyears ahead of Facebook, the Facebook team hooked up with Skype and went out and added some awesome functionality in one swift move.

I have no doubt Google+ will succeed; too many people are betting on Google+ to do it right, and too many “IT industry gurus”-wanna-be:s have put their money on Google+ for it to fail, so they will keep telling me and everyone else how great it is until we’re all zombified into agreeing. Google+ has some great potential, when it’s ready. So far, the greatest thing (IMHO) is the ability to handle Circles in a swift, easy and efficient manner to control visibility and scope of your posts. Facebook has this too, but it’s much more cumbersome and hard to use. 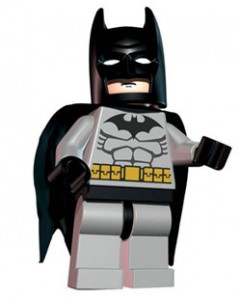