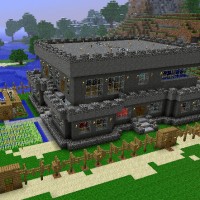 Alexander has been talking about it for some time. Needless to say, that caught Filip’s attention. So, once I downloaded (and purchased) Minecraft for Alexander this weekend, I had but little choice to do the same for Filip. They’ve now spent some 10 hours each on the game (so far); and they’re loving it! It’s pixelated (sort of) and the idea is rather simple, which is probably why it works so well. Alexander is used to playing FPS such as Call of Duty – Black Ops, Modern Warfare, etc. But this has gotten his interest pegged in a completely different direction. It’s quite fascinating to watch actually.

Oh, and if you do decide to get it, be a good sport and buy it. The publisher, Mojang, deserves it. Big time.

3 thoughts on “Minecraft, a pixelated game worth buying (and .. playing)!”