So the “talent show” (for a lack of better words) Idol has finally managed to deliver a true kick ass rock talent in their 2010 Swedish edition. His name, Jay Smith. An up and coming artist for sure. Rough around the edges, huge talent, and a fascinating ability to transform the lamest songs into emotional feel-good tunes with an attitude.

Of course, every little rock ‘n’ roll story needs a “scandal”, and Idol 2010 Sweden is no exception. Jay Smith tested positive for hashish (or the active substances) and all of a sudden everyone watching the show (and some who don’t) has an opinion about Jay’s character. Many of the comments and words are from the “You did something bad, and because I’m better than you, I have the right to judge you”-crowd. I realize this is nothing new, this is what intolerant and ignorant people do; and since they can’t motivate their lashing out at someone they know nothing about with anything better than “It’s against the law” and “It’s not good for you”, the arguments and discussions quickly go sour and rather flat. 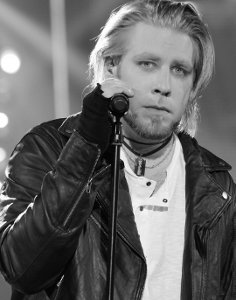 Whether or not you are for or against dope (or any other drug), I don’t understand how someone you admire or enjoy for one attribute, feature or talent is any different just because they drink, swear or smoke weed. Do you have any plans on marrying the person? Are you hiring him/her as your babysitter? Or were you thinking this individual with this awesome talent could not possible be human with all the flaws, faults, and wonderfulness that comes with that?

And in a world full of truly bad and sad things, it’s fascinating to see how media can blow up something as insignificant as this and smear it all over their dirty little tabloids, blogs and websites.

There are many many more.

Slash: you need to check this guy out — he’d be an awesome lead singer for Velvet Revolver 🙂

Jay: Hang in there, we love you, and we don’t care if you have pink elephants on your underwear or smoke weed (now, in the past, or in the future). Just as long as you keep doing what you do so well we’re happy as pigs in mud!